"Nessun Golfo al mondo è splendido come quello di Baia" ("No Gulf all over the world is so splendid as the one of Baia") these words where written by the poet Orazio, at the end of the I century a.c., when Baia was a residential centre with many villas and thermal baths build with the landscape of the small gulf. The beauty of the landscape , the presence of hot springs and sulfur fumes coming from underground volcanic attracted, since the second century b.c., the Roman nobility to spend the otia in their seaside villas and then later several Roman emperors with their court .

Baia is in the center of Campi Flegrei (Phlegraean Fields), the "burning fields", that is the land of volcanos where history, legend, myth and mystery melt in a spectacular landscape. The myths sung by Homer and Virgil, The Greek culture that spread onto the rest of the peninsula, the record of the times  in which the Roman aristocracy built sumptuous villas: all of it helped to increase the fascination of an area where extraordinary natural beauty and the wondreous opera of man create an incomparable scenery.

Here we suggest some of many interesting sites to visit: 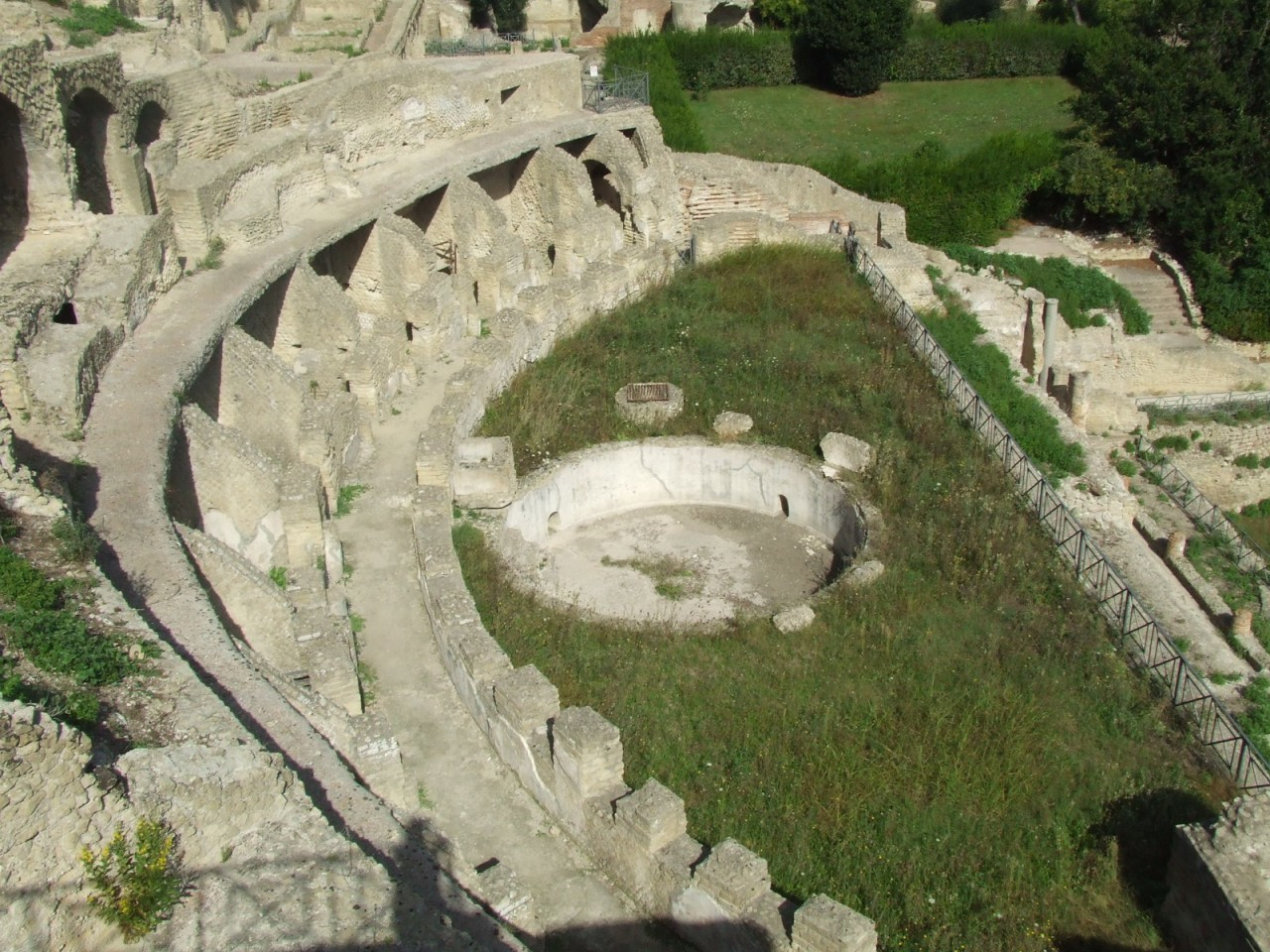 Not so far from our seat ther is the Roman Thermal Baths of Baia. All the complex has been devided in different areas for an easier identifications of the different areas.

Therefore, observing the complex from the top to the sea, on the left there is the "Diana's Temple", called like this for the some frescos found which represented hunting illustrations. Nowadays only half of the huge dome remained and originally it would have been a big sauna for the steam coming from the ground.

It stands majestic and mighty on the rise that overlooks the west of the Gulf of Pozzuoli and was built on the ruins of the imperial villa of Julius Caesar, by order of King Alfonso II of Aragon in the years around 1490-95. Today it houses a museum exhibiting unique archaeological, with extraordinary value, finds from the Phlegraean Fields . This fortress is definitely worth a visit, not only for the museum, but also for the beautiful setting natural scenery that can be admired from its towers. 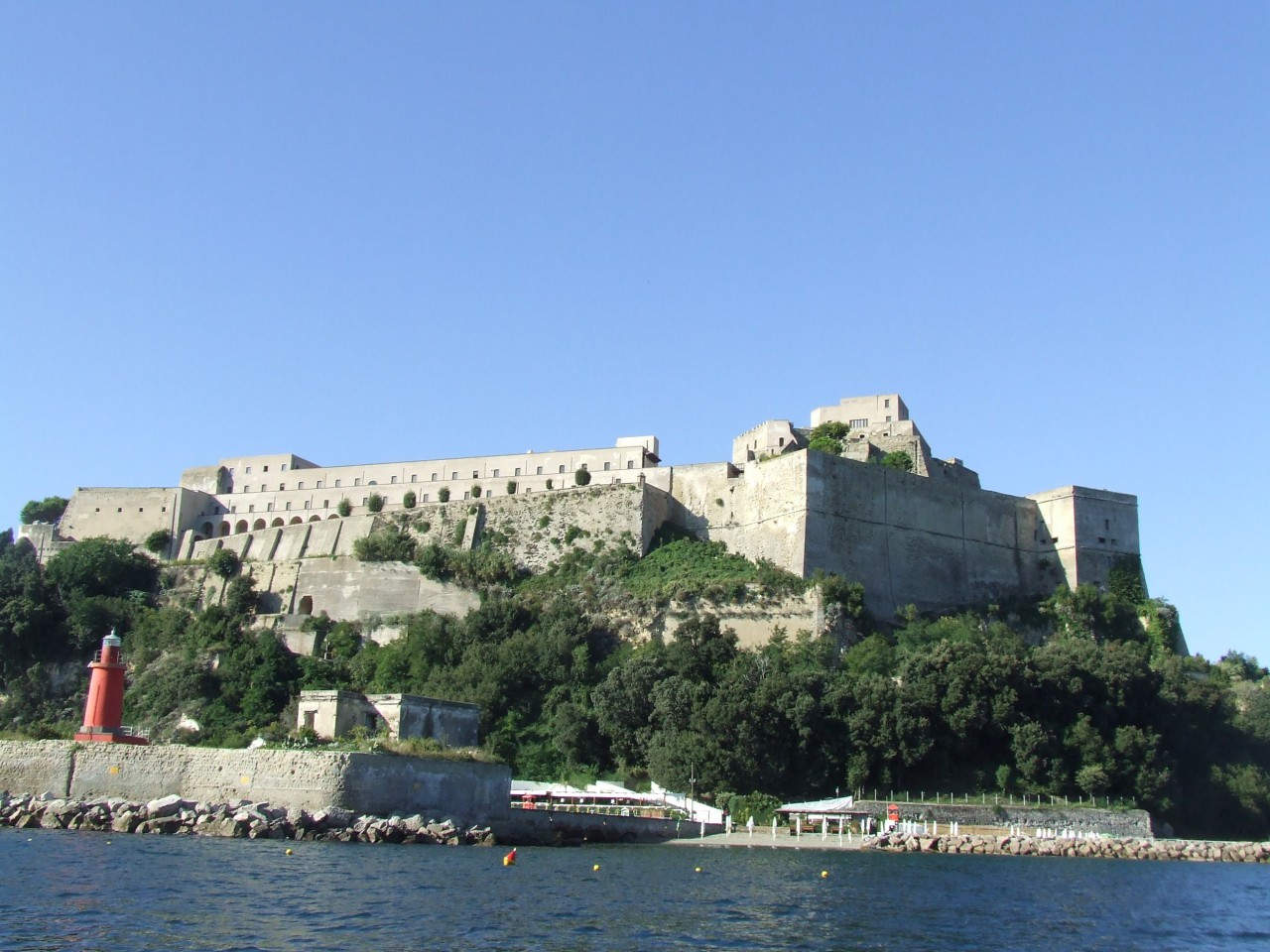 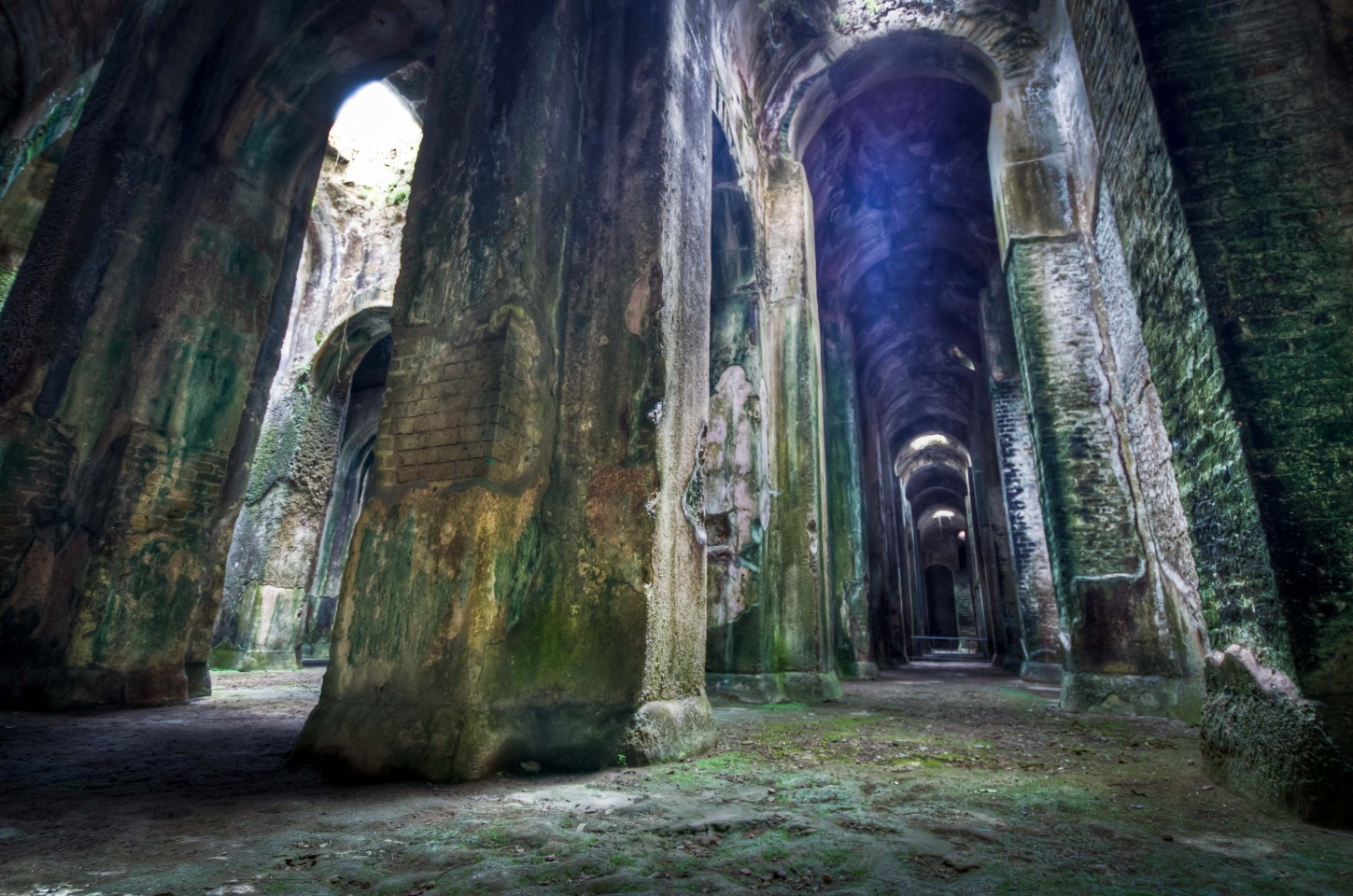 It was certainly the main tank of the ancient Roman aqueduct that brought water from the river Serino to the praetorian fleet of Miseno . Built in the era of Augustus , it is a masterpiece of engineering and architecture . Dug by the Romans in tufa , measuring 70 meters long by 25.5 meters wide , high 15 meters .. The overall view evokes the interior of some Romanesque basilicas .

The Cave of the Sibyl Cumana is one of the most famous and mysterious of the Phlegraean Fields . Located in the famous Acropolis of Cuma , the cave is an impressive tunnel excavated into the tuff , long 131 meters  and 5 high, of trapezoidal shape . And it is here that , according to ancient legends , lived the Sibyl . This long corridor , the dromos , is crossed by six shafts of light that create a particularly fascinating and ends in the so-called Oikos Endotatos : the room where the Sibyl pronounced her oracles . 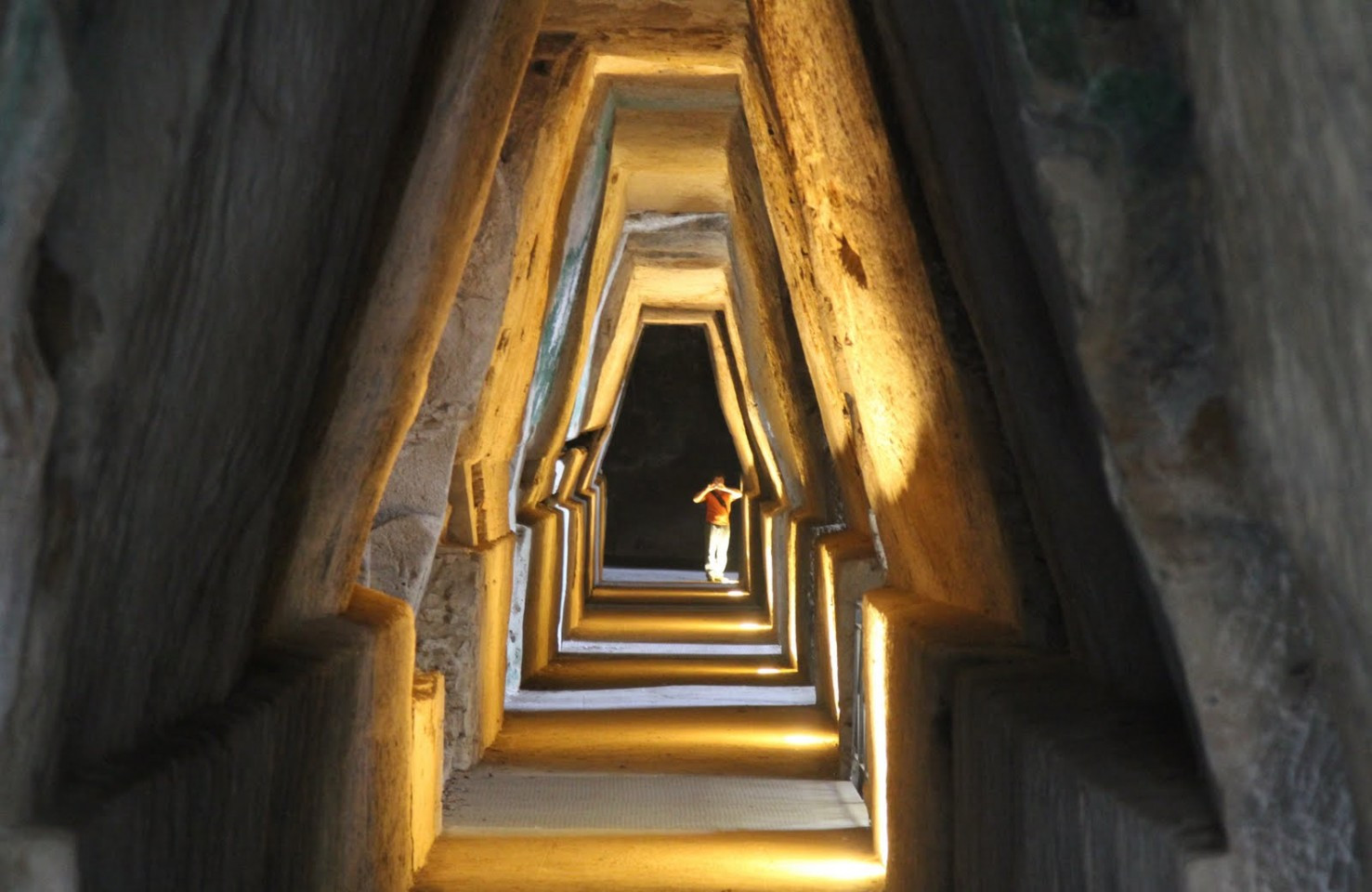 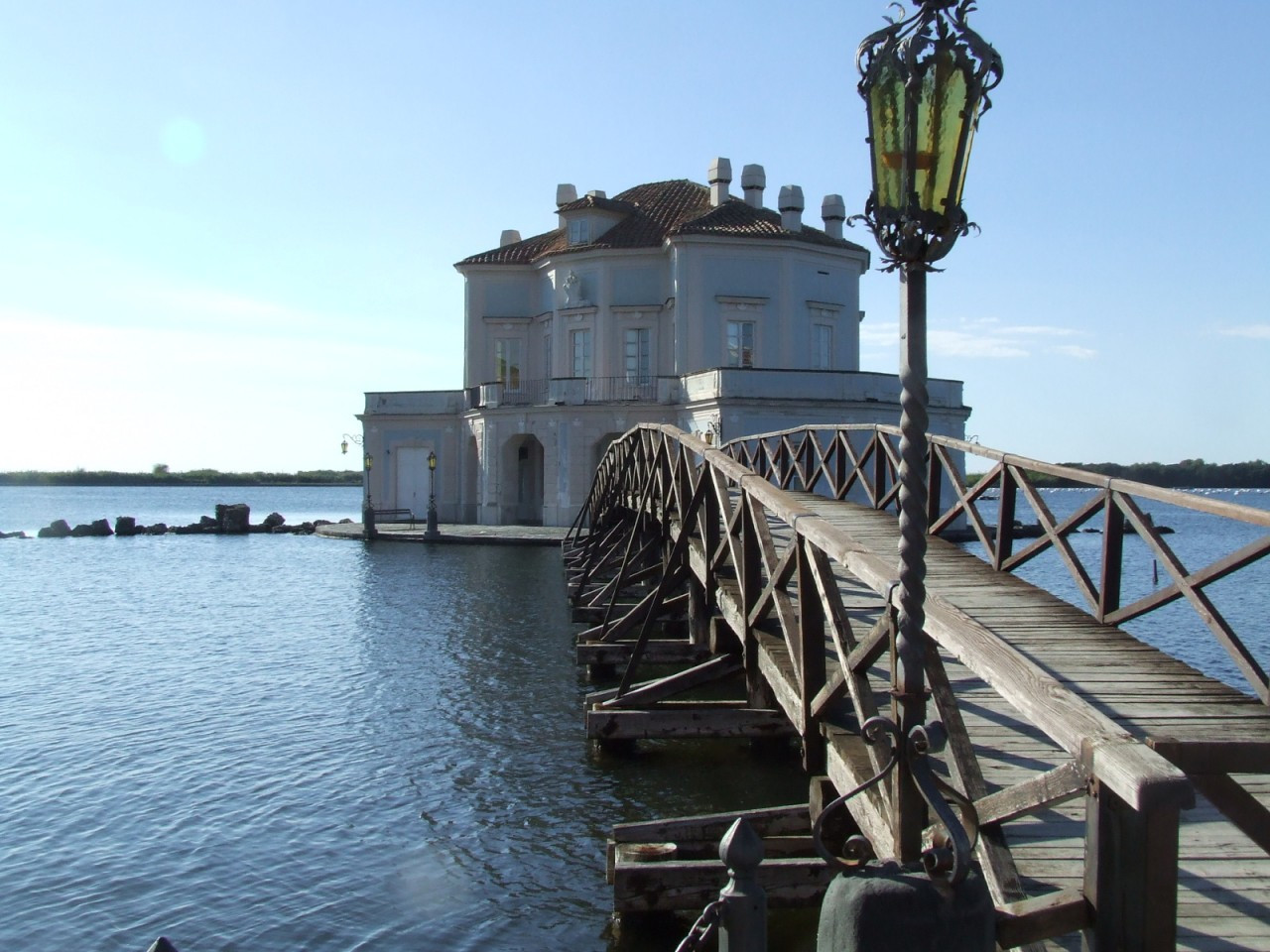 Commissioned by King Ferdinand IV , it was built in 1782 and designed by Carlo Vanvitelli as an elegant hunting lodge , on a small island in the lake Fusaro ( Bacoli ) joined to the mainland by a bridge . The little house was reserved ,by the times , to the most illustrious guests , among which the Austrian Emperor Francis II , Italian President of the Republic Luigi Einaudi , W.A. Mozart , Rossini , The sovereigns of Prussia , King Umberto I , the Czar and Czarina of Russia .

It's the third arena per dimensions of the Roman world , after the Colosseum in Rome and Capua . It was built in the mid- first century . A.D. During the imperial spectacle gladatorio had spread considerably , as playful get-together of the urban community . The enormous building was structured in three levels were outside , crowned at the top by an attic . Such as the Colosseum , also here the arena retains memory of Christian martyrs . 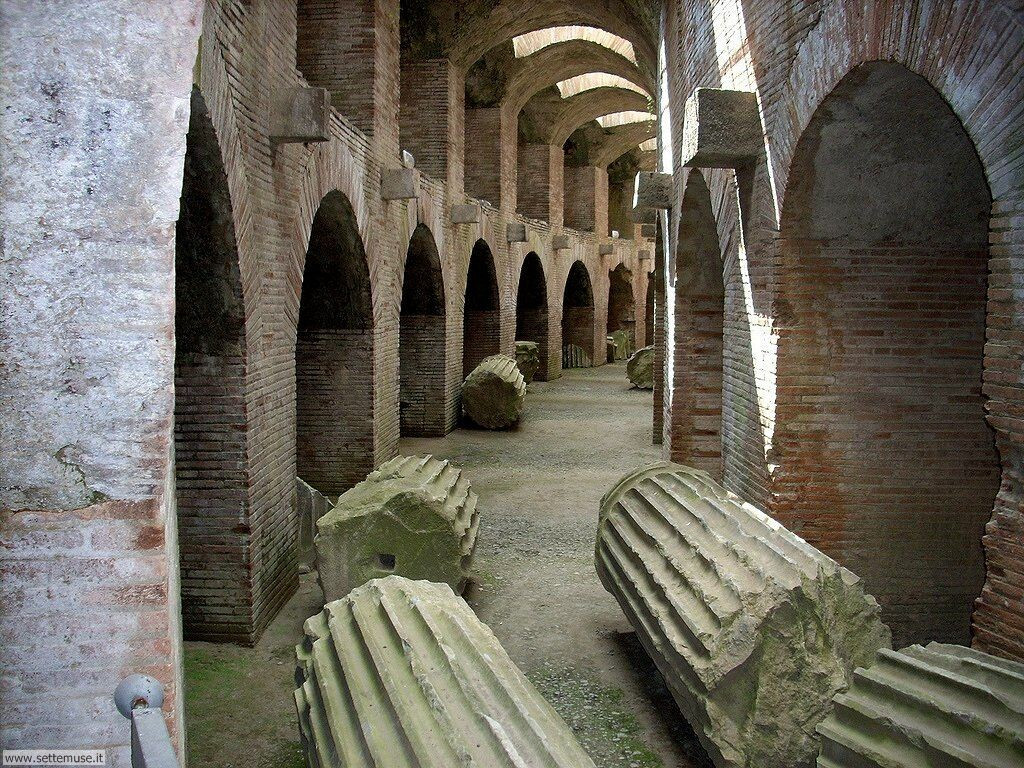 In collaboration with "LA TERRA DEI MITI" we organize guided tours to the beautiful other sites (on land!) of the Phlegraean Fields.
La Terra dei Miti is a society that promotes the knowledge of the Phlegraean Fields, territory of enormous historical-cultural and landscape value of the Campania region. With them we have designed touristic  itineraries, combining the visit to the sea of ​​the Underwater Archaeological Park of Baia with a visit to one of the very interesting archaeological sites in the area. For info write to info@laterradeimiti.it