These dives can be reached only with full day excursions after a navigation of about 1h. one way, with two dives and a pocket lunch.

It's the strip of land joining the Sorrento's peninsula and Coast of Amalfi and it seems almost to rejoin with Capri's Island. In 1997 all the area became a Marine Reserve and it is spread on a surface of the sea on over 1500 hectares, between the Massa Lubrense's and Positano's municipalities. The reserve protects about 40 km of coast and the sea nearby. It is classify as Special Protected Area of Mediterrenean Interest.

This huge and amazing reef was established "Protected Biological Area" in 1993. It is formed by five big rocky pinnacles with ripid walls falling down at a depth of about 50 mt. It's a huge reef of extraordinary beauty and uniqueness, soon outward Vico Equenze, the first village of Sorrento Coast arriving from Naples.
Here it's possible to do more then one dive and its uniqueness is due not only to the unbelieavable morphology of the reef, but also to its proximity to the mouth of Sarno river. This river brings into the area a lot of nutrients which allow the growth and development of an amzing marine life.
Purple and yellow gorgonias, together with the yellow big sponges Axinella cannabina start growing, already at 18 mt.. Swimming deeper, the amount of soft corals increases, hiding an unbelievable small marine life such as shark eggs. Deeper than 30 mt. we can admire big branches of the rare Savalia Savaglia and find out small sharks and big congers in the sharp cracks. The forest of soft corals together with the amazing shapes of the rock show a really suggestive scenery. Many big groupers and dentex live in the area and don't seem to be frightened by the divers. Very often it's possible to encounter eagle rays, amberjacks or small tunas.
We absolutely suggest to dive here more then once to explore the different fascinating sides of the reef. 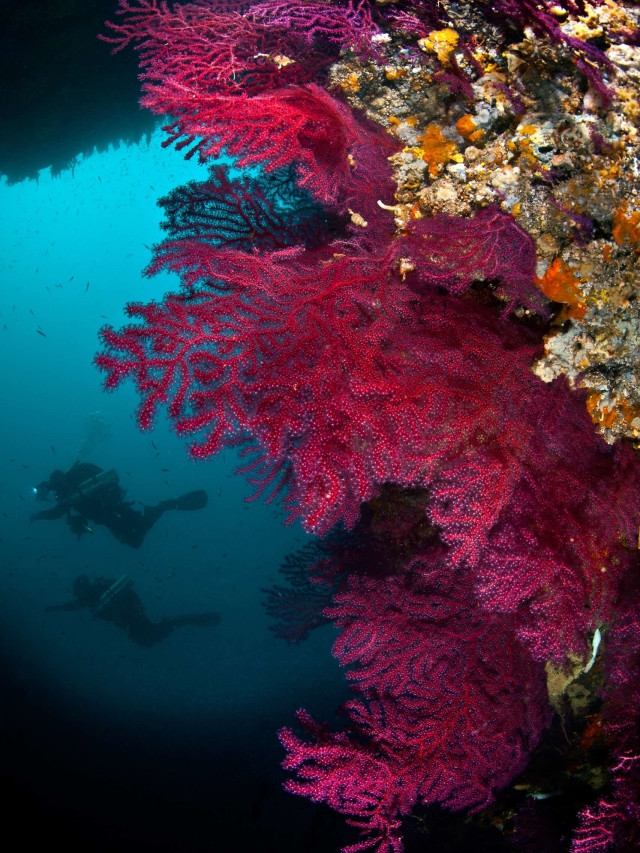 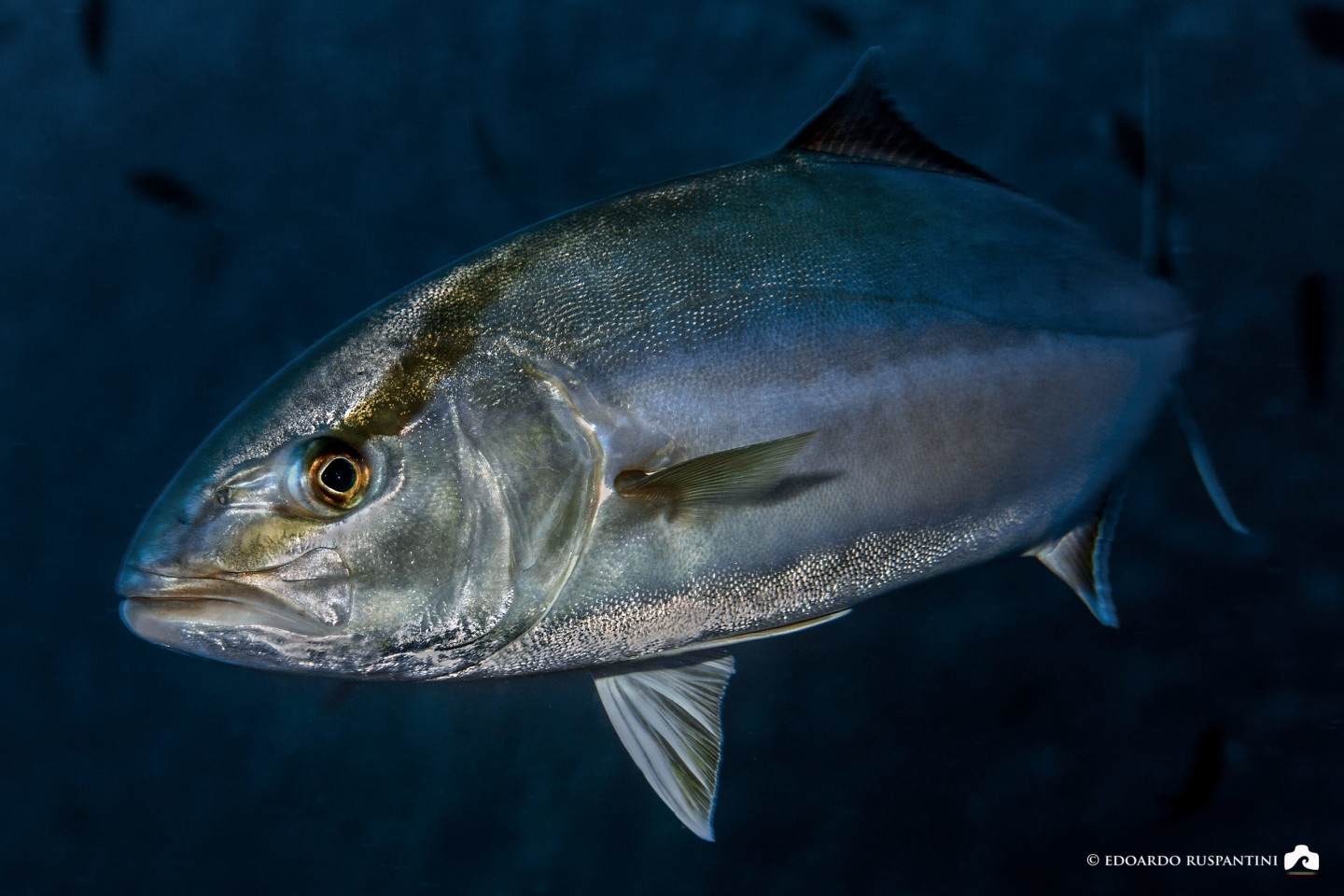 The dive is along the western side of the beautifull bay of Sorrento, between Marina Grande fishing village and Pollio Felice's ancient roman villa.

Here the wall of the point drops vertically in the blue deeper then 60 mt., and it's colonized by wonderfull and very healthy different kinds of corals: yellow and red sea funs, along which branches we can admire very often dogfishes egs, spirographs and tunicates on the wall.
We can meet many other animals such as groupers, white breams or small tunas, infact once upon a time the tunas fishing factory of Sorrento was famous.

For its morphological characteristics it's a dive for everybody. Infact the beginners can start their dive from the shore without renouncing to the fascination of a wall dive. The more experts divers can dive along the wall, visiting some caverns with different difficulty levels.

In Puolo the night dives are amazing, especially for the abundance of an unbelievable micro life such as:
hippocampus guttulatus, alicia mirabilis, Aplysia depilant, Stenopus, parapandalo and, with some luck, the very rare Cymathium parthenopeum. 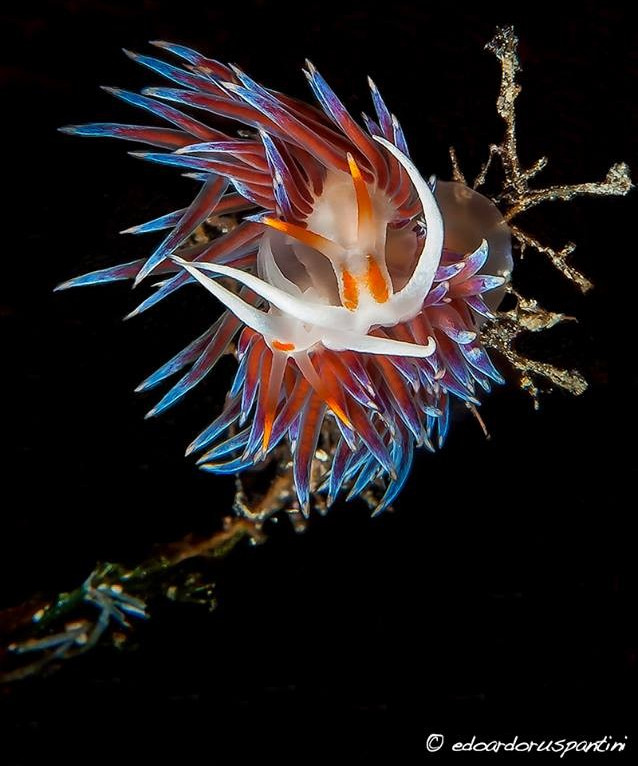 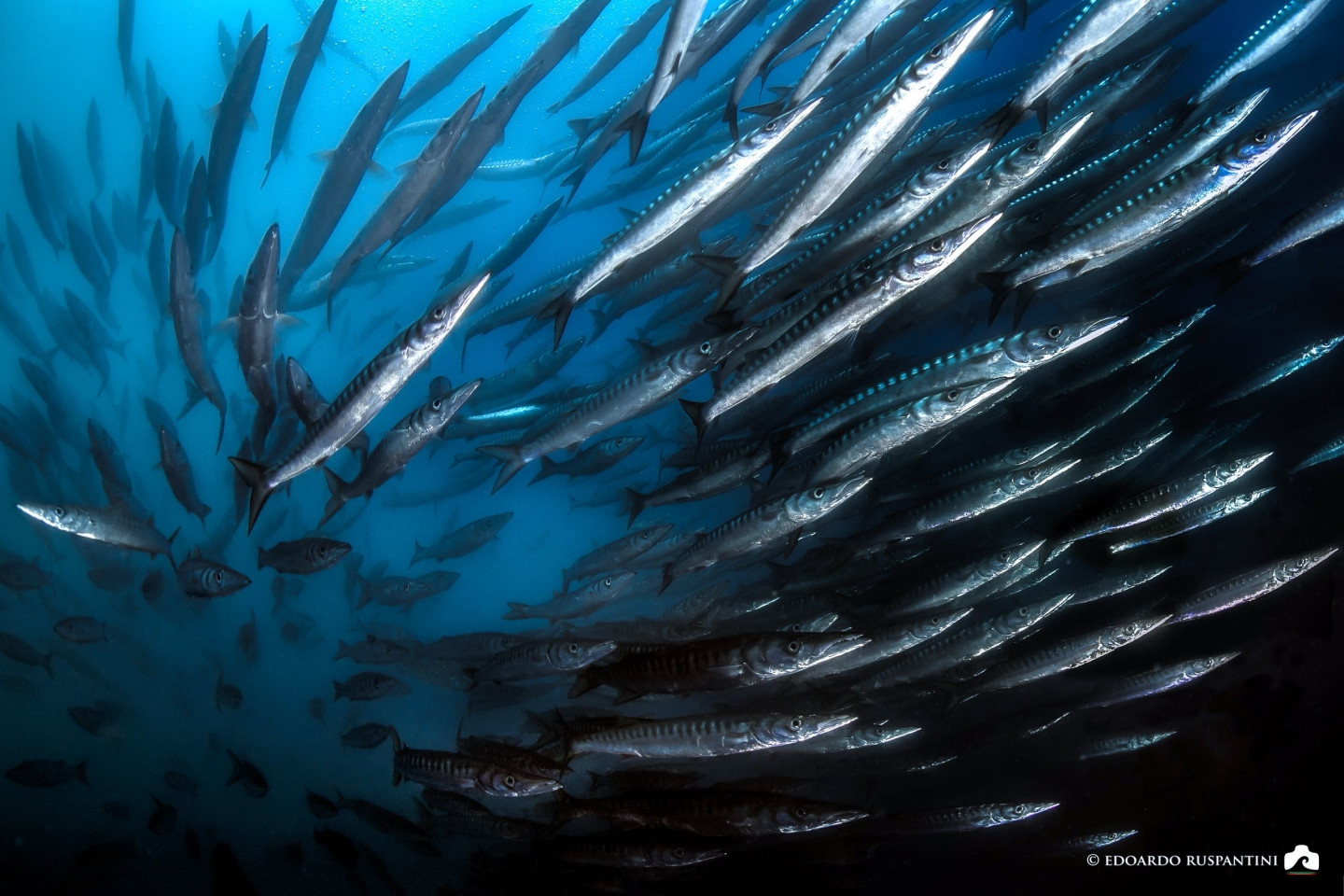 It's less then 1 mile far from the diving embarking dock of Punta Campanella Diving Center and it is the fulcrum of the integral area of the Marine park of Punta Campanella. The close distance to the coastline and, the costant presence of marine currents, incentivize the development of a very healthy and abbundant marine fauna contribuing to make this one of the most suggestive dive of the Gulf of Naples.

It's very easy to meet many fish species such as dentex, sea basses, big groupers and sometimes the jhon dory. The northern side of the rock has an uncomparable "garden" of amazing gorgonias; meanwhile the western side, at a shallower depth, is covered by a moltitude of very healthy and colourfull parazoanthus.

At few hundreds meters far from Vervece Rock there is a wreck of a small cargo vessel which sank about 20 years ago after a storm. It's a very beautiful dive with a descent in the blue, at a maximum depth of 42 mt.

Sometimes the presence of strong currents makes the dive very difficult, but when the current is very light and the divers don't consume so much, swimming at a depth of about 30 mt. it's possible to reach Vervece rock. 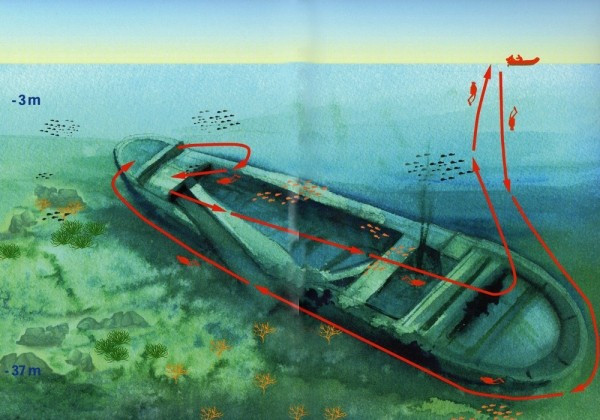 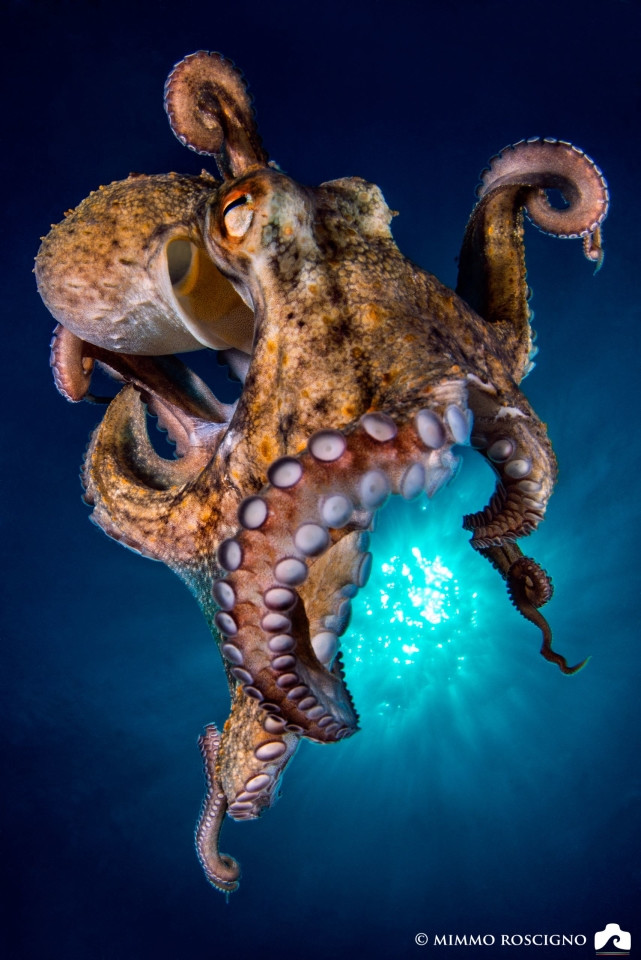 Punta Campanella closes to the harbor is the watershed between Gulf of Naples and Gulf of Salerno. At the extreme edge of Campanella Point in wild isolation rises the temple of the goddess Minerva, at the point which there was subsequently erected the tower in the sixteenth century, still today it is possible to admire the remains.  Hence the great archaeological interest that covers this area. In fact, its depths still preserve interesting artifacts Roman era. The morphology quite varied, allows during the same dive to cross many different natural scenes between them. The dive alternates area of ​​boulders, full of holes, sloping plateaus covered by huge red gorgonian fans, with sheer walls covered with dense yellow gorgonia up to peep in small caves where the diver is surrounded by swarms of parapandali (Plesionika narval). During the fall season you are guaranteed hunting scenes of tuna and small anchovies that bench seek refuge along the coast.

The cave, of karst formation, is on the eastern side of the same name bay. The entrance is at a depth between 6 and 15 mt., 3mt. wide and 80 mt. long. The bottoms are made of white sands with big grains so the divers, when swimm inside the cave, don't raise suspension of particles.

It's a corridor with high vertical sides, which, after about 40 mt. of distance covered, becomes so narrow allowing the passage of one by one diver. There are two vertical syphons, through which you can reach the surface in small chambers studded of wonderful alabaster. . Biological particularities are the brotula fish (Oligopus ater) and the pink actinia (Halcampoides purpurea). 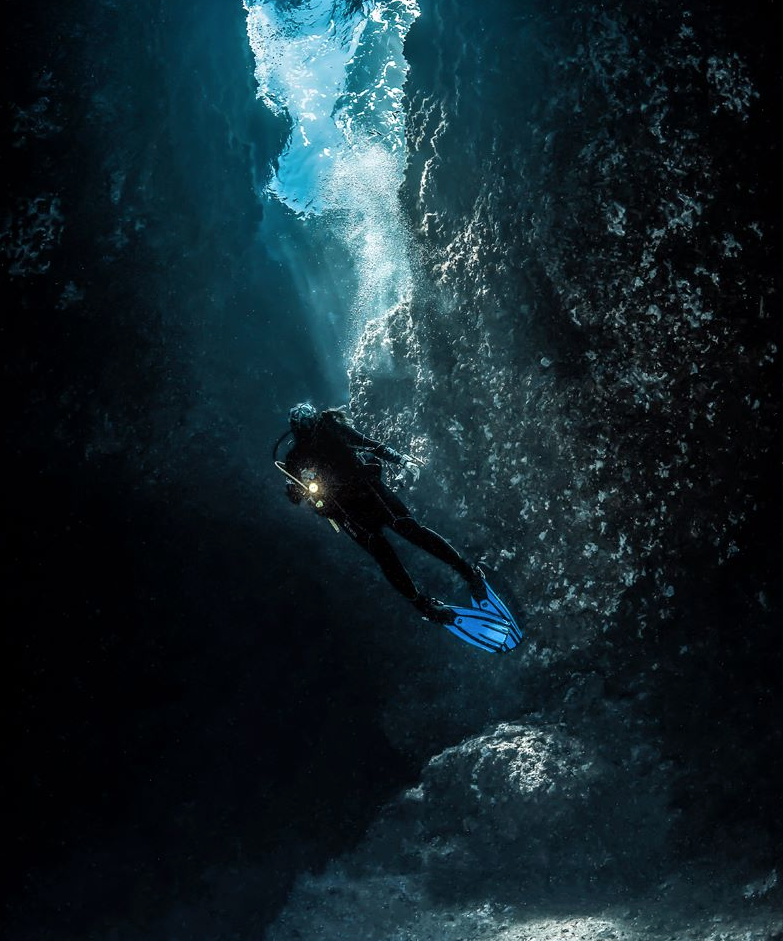 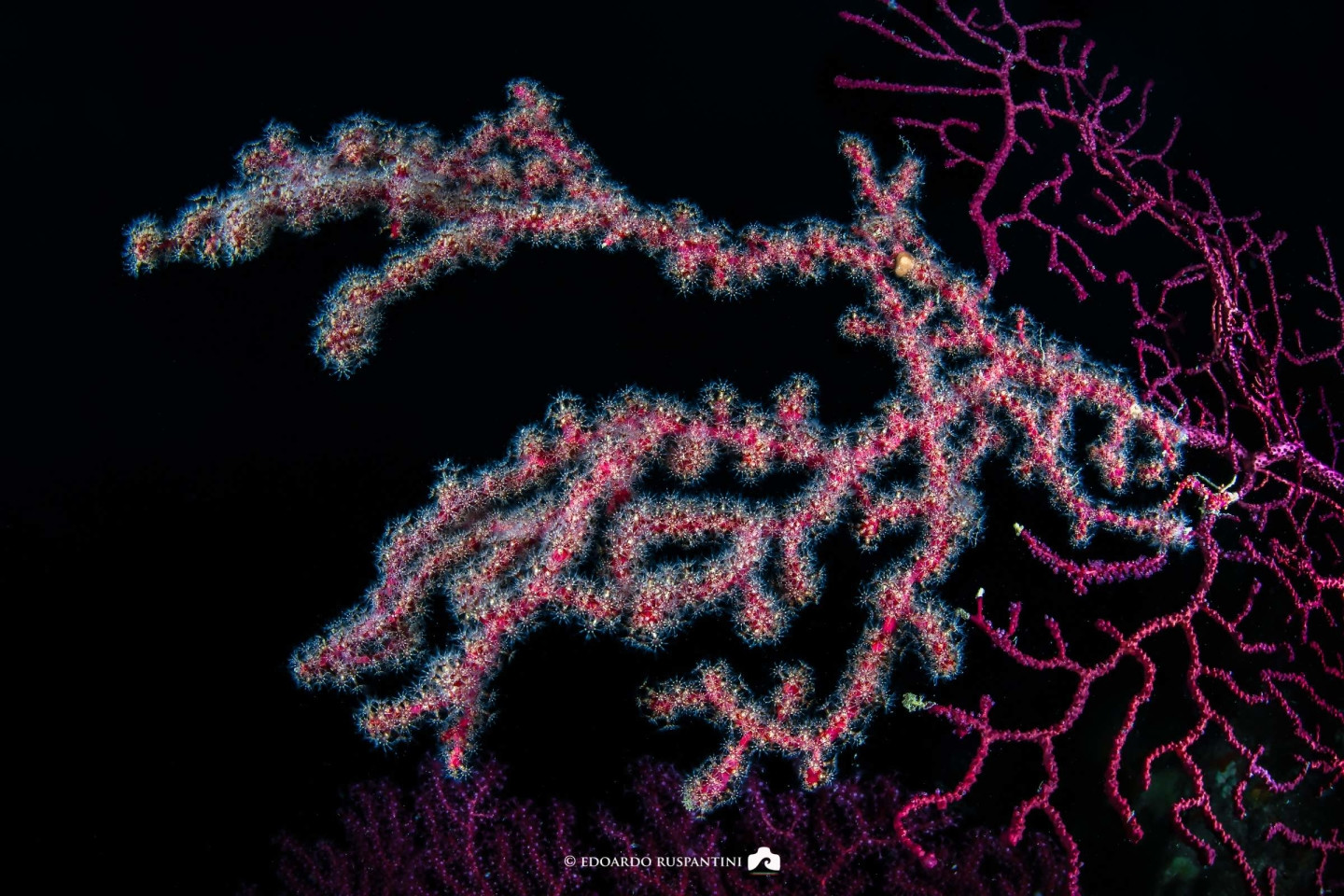 We anchor in the small bay underneath the sharp amazing cliff from where, in the ancient times, the roman imperor Tiberius used to dash down the undesirable slaves. The dive takes its name from this famous cliff. It's a wall dive departing smoothly from the shallow depth of the bay and becoming steeper as the divers continue swimming keeping the cliff on the right. The trasparancy of the water makes it a very bright dive, full of life; from the purple and yellow gorgonias to different kinds of colourful sponges.

It's the most beautiful and spectacular dive of Capri, but the possible strong current and the continuous passage of many small boats, not respecting the scuba flag, make it only for expert divers. Looking at the morphology of the bottoms it seems the hull of a ship upside down. It's infact a rocky point which comes out from the external cliff for hundreds meters, dropping almost vertically in the blue. The marine life is very heathy. It's plenty of gorgonias, soft corals and colourful sponges which cover many cracks . There, with a torch, it's possible to discover hidden murays, groupers. Every where there are huge schools of anthias all around. It's not rare to meet barracudas and small tunas passing by. 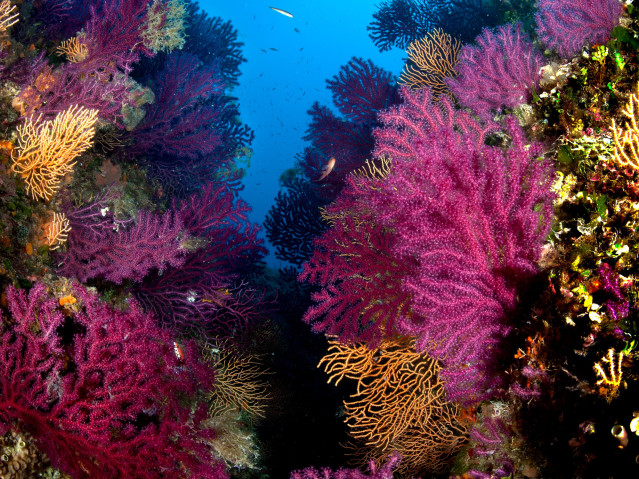